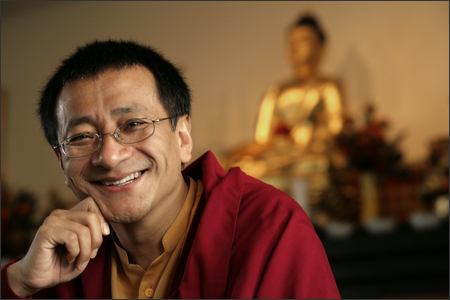 The founder and president of Nalandabodhi, Dzogchen Ponlop Rinpoche, is a widely celebrated Buddhist teacher and an advocate of American and Western Buddhism. A lover of music, art and popular culture, Rinpoche is a tech-savvy poet, photographer, and visual artist. He brings the essence of the Buddha’s message to modern audiences with humor and practicality. He is also the founder of Nitartha International, a non-profit educational corporation dedicated to preserving the contemplative literature of East Asia. In 1996, through the inspiration of Khenchen Thrangu Rinpoche, Rinpoche established a division of Nitartha International that he named Nitartha Institute, a systematic and comprehensive program of higher Buddhist studies. The Institute’s curriculum reflects the rigorous philosophical training of Rinpoche’s own monastic college, yet adapts it for Western students and integrates it with the practice of meditation.

Rinpoche is acknowledged as one of the foremost scholars and meditation masters of his generation in the Nyingma and Kagyü schools of Tibetan Buddhism. He is known for his sharp intellect, humor, and easygoing teaching style.

In 1981, at fifteen, Rinpoche entered Rumtek Monastery’s shedra, or monastic college, the Karma Shri Nalanda Institute for Higher Buddhist Studies. There he trained in the traditional Indo-Tibetan intellectual disciplines of Buddhist philosophy, psychology, logic, and debate. Rinpoche’s teachers and colleagues alike observed him to be a remarkably bright student with a formidable talent for debate. He was appointed by Khenchen Thrangu Rinpoche as a Teaching Assistant and charged with the task of developing the shedra’s library by the Third Jamgon Kongtrul Rinpoche. Later, he would become the primary assistant to Khenpo Tsültrim Gyamtso Rinpoche, transcribing, editing, and compiling some of Khenpo Rinpoche’s most famous and influential philosophical compositions. The first elected president of the college’s Students Union, Rinpoche completed the full shedra curriculum in 1991, graduating first in his class and receiving the degrees of Acharya and Ka-Rabjampa.

Rinpoche holds lineages in both of Indian and Tibetan Buddhism’s two most profound traditions of meditation: Mahamudra (“the great seal”) and Dzogchen (“the great perfection” or “great completion”). Under the close personal tutelage of the greatest masters of the 20th century, Rinpoche has trained intensively in the wide variety of methods that these traditions offer for gaining a thorough understanding of the mind and an expansive, direct realization of the mind’s true nature. Some of the masters who guided Rinpoche in meditation through instruction and transmission include the 16th Karmapa, Dilgo Khyentse Rinpoche, Tulku Urgyen Rinpoche, Nyoshul Khen Rinpoche, and his present-day root guru, the great scholar-yogi Khenpo Tsültrim Gyamtso Rinpoche.

Rinpoche is author of several books, most recently, Emotional Rescue: How to Work with Your Emotions to Transform Hurt and Confusion into Energy that Empowers You (available for pre-order). Other titles include Rebel Buddha: On the Road to Freedom, Mind Beyond Death, Wild Awakening: The Heart of Mahamudra and Dzogchen, and Penetrating Wisdom: The Aspiration of Samantabhadra. He is a frequent contributor to Buddhadharma: A Practitioner’s Quarterly and the Shambhala Sun. His writings also appear in issues of Best Buddhist Writing and other anthologies. You can connect with Rinpoche on Twitter, Facebook and Instagram @rebel_buddha.

As for further info regarding his previous incarnations and his present life, see: www.dpr.info.

Dzogchen Pönlop Rinpoche is one of the main advisors for KCCL.