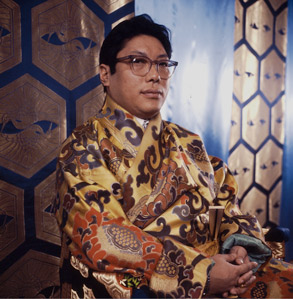 Chögyam Trungpa is celebrated as one of the most influential spiritual teachers of the 20th century. He is renowned for his contribution to the understanding of Buddhism in North America and the introduction of authentic Buddhist practice throughout the West. His books are considered classics on meditation and the Buddhist path.

[The following biographical sketch of Trungpa Rinpoche is excerpted from the Chögyam Trungpa Legacy Project: http://chogyamtrungpa.com

The Venerable Chögyam Trungpa Rinpoche was born in the province of Kham in eastern Tibet in 1939. When he was just thirteen months old, he was recognized as a major tulku, or incarnate teacher. … Chögyam Trungpa was the eleventh in the teaching lineage known as the Trungpa Tulkus.

Trungpa Rinpoche, after being enthroned as supreme abbot of Surmang Dutsi Til Monastery and governor of Surmang District, began a period of training that would last eighteen years, until his departure from Tibet in 1959. As a Kagyü tulku, his training was based on the systematic practice of meditation and on refined theoretical understanding of Buddhist philosophy. One of the four great lineages of Tibet, the Kagyü is known as the practicing (or practice) lineage.

At the age of eight, Trungpa Rinpoche received ordination as a novice monk. Following this, he engaged in intensive study and practice of the traditional monastic disciplines, including traditional Tibetan poetry and monastic dance. His primary teachers were Jamgön Kongtrül of Sechen and Khenpo Gangshar—leading teachers in the Nyingma and Kagyü lineages. In 1958, at the age of eighteen, Trungpa Rinpoche completed his studies, receiving the degrees of kyorpön (doctor of divinity) and khenpo (master of studies). He also received full monastic ordination.

Escape and Time in India:

The late 1950s were a time of great upheaval in Tibet. As it became clear that the Chinese communists intended to take over the country by force, many people, both monastic and lay, fled the country. Trungpa Rinpoche spent many harrowing months trekking over the Himalayas (described in his book Born in Tibet). After narrowly escaping capture by the Chinese, he at last reached India in 1959. While in India, Trungpa Rinpoche was appointed to serve as spiritual adviser to the Young Lamas Home School in Delhi, India. He served in this capacity from 1959 to 1963.

Trungpa Rinpoche’s opportunity to emigrate to the West came when he received a Spaulding sponsorship to attend Oxford University. At Oxford he studied comparative religion, philosophy, history, and fine arts. He also studied Japanese flower arranging, receiving a degree from the Sogetsu School. While in England, Trungpa Rinpoche began to instruct Western students in the dharma, and in 1967 he founded the Samye Ling Meditation Center in Dumfrieshire, Scotland. During this period, he also published his first two books, both in English: Born in Tibet (1966) and Meditation in Action (1969).

In 1968 Trungpa Rinpoche traveled to Bhutan, where he entered into a solitary meditation retreat. While on retreat, Rinpoche received a pivotal terma text for all of his teaching in the West, The Sadhana of Mahamudra, a text that documents the spiritual degeneration of modern times and provides its antidote, genuine spirituality that leads to the experience of naked and luminous mind. This retreat marked a pivotal change in his approach to teaching. Soon after returning to England, he became a layperson, putting aside his monastic robes and dressing in ordinary Western attire. In 1970 he married a young Englishwoman, Diana Pybus, and together they moved to North America. Many of his early students and his Tibetan colleagues found these changes shocking and upsetting. However, he expressed a conviction that in order for the dharma to take root in the West, it needed to be taught free from cultural trappings and religious fascination:

During the seventies, America was in a period of political and cultural ferment. It was a time of fascination with the East. Almost from the moment he arrived in America, Trungpa Rinpoche drew many students to him who were seriously interested in the Buddhist teachings and the practice of meditation. However, he severely criticized the materialistic approach to spirituality that was also quite prevalent, describing it as a “spiritual supermarket”. In his lectures, and in his books Cutting Through Spiritual Materialism (1973) and The Myth of Freedom (1976), he pointed to the simplicity and directness of the practice of sitting meditation as the way to cut through such distortions of the spiritual journey.

Fluent in the English language, Chögyam Trungpa was one of the first Tibetan Buddhist teachers who could speak to Western students directly, without the aid of a translator. Traveling extensively throughout North America and Europe, he gave thousands of talks and hundreds of seminars. He established major centers in Vermont, Colorado, and Nova Scotia, as well as many smaller meditation and study centers in cities throughout North America and Europe. Vajradhatu was formed in 1973 as the central administrative body of this network.

In 1974 Trungpa Rinpoche founded the Naropa Institute (now Naropa University), which became the first and only accredited Buddhist inspired university in North America. He lectured extensively at the institute, and his book Journey without Goal (1981) is based on a course he taught there. In 1976 he established the Shambhala Training program, a series of seminars that present a nonsectarian path of spiritual warriorship grounded in the practice of sitting meditation. His book Shambhala: The Sacred Path of the Warrior (1984) gives an overview of the Shambhala teachings. …

During his seventeen years of teaching in North America, Trungpa Rinpoche developed a reputation as a dynamic and controversial teacher. He was a pioneer, one of the first Tibetan Buddhist teachers in North America, preceding by some years and indeed facilitating the later visits of His Holiness the Karmapa, His Holiness Khyentse Rinpoche, His Holiness the Dalai Lama, and many others. In the United States, he found a spiritual kinship with many Zen masters, who were already presenting Buddhist meditation. In the very early days, he particularly connected with Suzuki Roshi, the founder of San Francisco Zen Center. …